Snow White was THRILLED to go to a 3-year old birthday party.  Generally not invited to parties nearly as often as her blonde princess girlfriends, Snow White was very excited to not only attend a party, but to also delight the princes and princesses with facepainting!  When Snow White arrived at the birthday girl’s castle, Snow White was greeted at the door by a delightful and very bright 3 year old who was very happy to have a real live princess at her party.

(Snow White found out later that her arrival caused many tears of joy amongst the adult female guests because their long awaited childhood dreams were coming true).

Snow White had lots of fun with the children and was very well taken care of by the birthday girl who was very attentive.  Snow White transformed her into a beautiful kitty cat with blue eyebrows.  Then, something very unusual happened when it was time for the birthday girl’s brother to have his face painted.  He was so comfortable having his face painted (and probably also very exhausted from all of the party preparations, excitement and activities) that he was fast asleep by the time he had been transformed into a puppy.  Snow White then had to say goodbye before the boy got to discover what he looked like as a puppy.  If only she had had a magic mirror handy to reveal the look on his face when he saw his reflection when he woke up later! 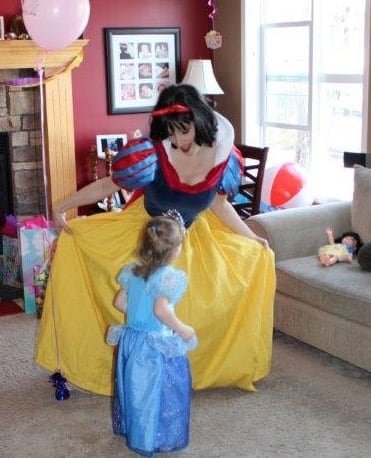